In the hope of helping some one in a similar case, and...

In the hope of helping some one in a similar case, and also as an expression of gratitude for what Christian Science has done for me, I send this testimony for publication. When about seventeen I was vaccinated, and later, perhaps a year, an eruption appeared on my hands. I went to a doctor, who said it had come from the vaccination. He gave me a remedy to use, but it had no good effect, and from that time on I was constantly trying other remedies. As they were applied, the disease moved from one place to another, and appeared in different forms. At last it came out on my forehead, about ten years ago, so that I could not wear a hat without great discomfort.

In the winter of 1908 a Christian Science friend came here from Chicago to visit her parents, and I asked her if she would try to help me. She said she would do all she could, but in a short time she returned to Chicago, so that the treatments were nearly all absent. There is no trace of the disease left, and now I am seventy-three years old. I would also say that my husband's health was very poor, but he has been treated by a Christian Science practitioner and is so much improved that he can work a good deal and the swelling has gone out of his limbs so that he wears shoes, something he had not done for years. He also sleeps and eats well.

Send a comment to the editors
NEXT IN THIS ISSUE
Testimony of Healing
Sincere gratitude for all the good that I have received... 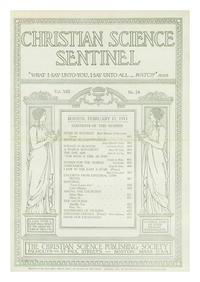