"GLORY TO GOD IN THE HIGHEST."

A well-known preacher once said in a sermon that he did not believe that life after death would be "an eternal sitting in damp clouds, playing on harps, and singing praises to God," as so many people seemed to think. This may have been a blunt way of expressing what he had found to be latent in the thought of many of his parishioners, but the reproof was none the less needed. Even now one is constantly confronted with the shadowy outline of some such materialistic and uncomfortable belief among professing Christians. Such a mental picture may perhaps be regarded as a mere reflex of medieval religious art. But when crude thoughts, such as these, are in possession, even if partially unrecognized and unavowed, we can hardly wonder that the modern world has shown increasing disregard of the teachings of those who, if they have not fostered such beliefs, have neither been able to prove their absurdity nor to substitute higher and loftier conceptions of the objects to be kept in view when obeying the apostolic injunctions to work out our own salvation, and to seek "an inheritance incorruptible, and undefiled, and that fadeth not away."

Perhaps there is no line of thought in which Christian Science lifts us into greater awakening light than in the view it opens out to us of what glory to God really means, and how it must necessarily fill heaven, to its widest echo, with enraptured strains of ceaseless praise. Just in the degree in which the true child of God, the expression of His being, is realized and demonstrated, thereby manifesting that spiritual sense which our Leader defines as "a conscious, constant capacity to understand God" (Science and Health, p. 209), shall we apprehend that song of praise to Him which rises in glad spontaneity in "the perfect rhythm of head and heart." To give glory to God is as necessarily a part of our being as to reflect the selfless Love which is the divine Principle thereof. The glory of sunlight is reflected in and by everything it rests upon, and it thus typifies the sunshine of Love. As one of our hymns voices it,— 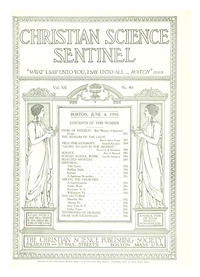