The statement of our reverend critic, that the teachings...

The statement of our reverend critic, that the teachings of Christian Science are "philosophical nonsense," can best be answered by referring the gentleman to the works that are daily being accomplished by this Science, the healing of all forms of functional and organic diseases, and the reforming of the worst cases of sin and of depraved appetites and passions, works which he could easily have seen for himself in his own city of Toronto had he taken the trouble to investigate. These works were what Jesus said should follow those who believed in him,—that is, understood his teachings,—and the fact that these results are today being brought about through the Christian Science interpretation of the Master's teachings proves this interpretation beyond a doubt to be the true one.

Send a comment to the editors
NEXT IN THIS ISSUE
Article
In a recent issue of the Journal I read a report of a... 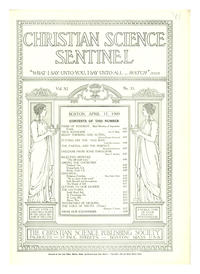