Sincerity is conceded to be one of the noblest traits in human nature, and it is easy to see why this is so. Sincerity is a manifestation of the truth; and truth includes all good. The final judgment passed on a man by the world is based on his sincerity. Does he mean truly? Is he sincere? Those who pass judgment may themselves be insincere, but in spite of this they recognize the standard of relative truth, and they judge by that standard. The sincere man can say no worse of his neighbor than that he is insincere, and can pass no greater condemnation upon one he has detected than to say that he lies. Truth being ultimate, absolute, the Principle of being, it is not strange that truthfulness has always been the human standard of right. No one can utterly divorce his consciousness from the Principle of being. If he could, he would annihilate his own consciousness. He would cease to be.

Whatever be the error of false material sense, in a vague way truthfulness, as an abstract high ideal, remains the crowning reality to mortal man. He believes in it as an ideal, but considers it impracticable in daily life. He does not analyze further, so fails to realize that an impracticable ideal is no ideal at all—that an ideal must be workable. Not being able, as he believes, to apply absolute Truth, he occupies himself with a phase of truth which he calls "sincerity," and that he limits again to his dealings with other men or to his intimate friends. He calls it being "on the square" with his friends. This is not a scientific sense of truth; but it is still a statement of the fact that men cannot escape from the truth. The influence of reality is upon them and they must, perforce, manifest it in some form. Man's true consciousness is consciousness of Truth; and the errors of material sense are not able to eliminate it. Sincerity in the human sense is a phase of truth which applies to human converse, but in reality it has a far deeper, broader meaning. "Be sincere with others" is its secondary demand. Its first is more important, "Be sincere with yourself;" and this first demand covers the whole ground. The man who is absolutely, uncompromisingly sincere with himself, can be no less to all other men and in all things which touch his life and work. 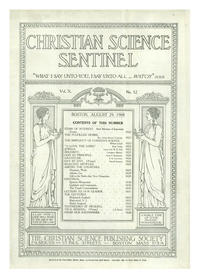