What is it that heals the sick? The Scriptures define God as one "who healeth all thy diseases," but they also define Him as "of purer eyes than to behold evil." How then can God heal disease and sin if He does not cognize these conditions? We read of the healing practised by the disciples and apostles, yet Peter and John rebuked the people for supposing that by their "own power or holiness" they had made the cripple to walk. And in our own day Christian Scientists are reviving the practice of Christian healing, many of them giving their time to that work, yet they invariably disclaim the healing power as vested in themselves. The question then recurs, What heals? Is it a person, or is it a Principle which all may understand, the demonstration of which accomplishes the healing work?

How can God save mortals from their troubles if He takes no cognizance of those troubles? God is infinite good, and His knowledge cannot therefore extend beyond that infinity and take in a sense of evil; hence the logical conclusion must be that the sense of evil is unreal. It is plain that an infinite God could not believe in or be conscious of His own absence, any more than shadows can be visible where light is universally diffused. As one begins to discern the real meaning of the allness of God, he begins to apprehend the fact that there can be nothing besides Him and His manifestation, and consequently to give up his belief in that which is unlike God. In Christian Science disease is not regarded as something which God must recognize in order to heal, but as a false sense or consciousness which the recognition of the infinitude of God destroys, even as a mirage vanishes before a truer perception of the facts. God truly heals and saves us, not by knowing evil but by not knowing it, by being eternally Himself and thus maintaining the perfection and harmony of creation. (See No and Yes, by Mrs. Eddy, pp. 39, 40.)

Send a comment to the editors
NEXT IN THIS ISSUE
Article
WHAT IS PLEASURE? 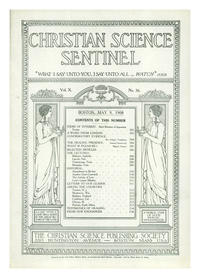