Our critic says that to quote the conclusion of an argument,...

Our critic says that to quote the conclusion of an argument, and that without even showing it is the conclusion of an argument, is legitimate. It is so legitimate that it can be used to imply the exact opposite of what a writer means. And the sentence quoted by him is an almost perfect example of this. The statement that Mrs. Eddy says "there is no sin" could convey, to a person unacquainted with her teaching, no other impression than that there is no relative sense of sin in the human consciousness, whereas it of course means nothing whatever of the sort. It means that speaking in the absolute, sin is an unreality. Allow me to make this clear. Supposing the writer of a text-book on light were to conclude an argument intended to show that light was positive, and that darkness was a mere sense of the absence of light, with the words "hence there is no darkness," the critic would consider it legitimate to omit the "hence," quote the words "there is no darkness," and say this man affirms there is no night.

It is of course extremely difficult to find in materialism a satisfactory medium for the expression of spiritual truth. The Jews used the history of the Old Testament in this way, and there grew up a class of critics who, as I have explained, treated the Bible as this critic would treat Science and Health.

Send a comment to the editors
NEXT IN THIS ISSUE
Article
Back to the world of light and life and work, back from... 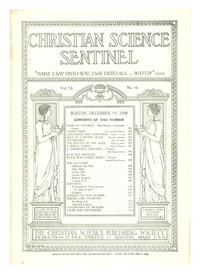