Concord, N. H., June 15.—At her beautiful home, Pleasant View, this afternoon, Mrs. Mary Baker G. Eddy, Discoverer and Founder of Christian Science, for the first time in six years gave a real newspaper interview, and for forty minutes talked not only entertainingly but with animation and keen intelligence on a number of subjects in which she is concerned.

When I make the statement that this was the first real interview Mrs. Eddy has given to a newspaper man in six years, I use the word "real" because I have in mind the fifty-five second meeting which about a dozen—eleven I think was the actual number—of newspaper writers had with Mrs. Eddy at her home on the 30th of last October. At that time Mrs. Eddy was in the presence of the reporters for less than a full minute and only a few questions, three or four, as I now recall it, were asked of her. The questions on that occasion were asked by a young woman who had been selected to perform that duty, and while Mrs. Eddy answered them readily, no opportunity was given any of the other writers present to propound any queries of their own or to hear her participate in a sustained conversation. 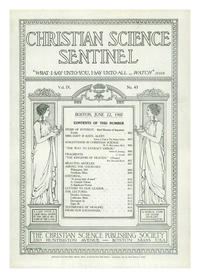