HISTORY OF THE NEW YORK ORGANIZATIONS

[We copy the following article from the May issue of the Broadway Magazine. We regret that in a history of the New York Christian Science organizations the fact was not named that the Rev. Mary Baker G. Eddy, Discoverer and Founder of Christian Science, gave the first lecture on Christian Science ever delivered in that city. —Editor Sentinel.]

Christian Science had acquired a very considerable following in Boston before it gained a foothold in New York City. Rev. Mary Baker G. Eddy, the Discoverer and Founder of Christian Science, and author of its text-book, "Science and Health with Key to the Scriptures," had established the Massachusetts Metaphysical college in Boston in 1881, and by the beginning of the year 1885 had instructed a great many students in Christian Science Mind-healing. Prior to the establishment of her College, for many years she had taught classes in Mind-healing. These students had scattered to different parts of the country, and wherever they went they began to teach and practise Christian Science. Under authority of Mrs. Eddy, each of her students was permitted to organize what was known as and institute for the teaching of Christian Science, and in these institutes classes were taught in Christian Science Mind-healing. By this method Mrs. Eddy's students gradually drew to themselves bodies of their own students, who in time formed the nucleus of a church. In some instances the students of several institutes united in forming one church. 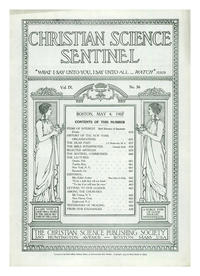