House Roll No. 51 and Senate Files Nos. 72 and 108 are measures introduced in the Nebraska legislature which every honest representative should unhesitatingly vote against. They are proposed measures which are without a particle of merit to their credit. Should our law-makers prove so unwise as to enact them into law, they would be a disgrace to the State and would stand as monumental sign-boards of the bigotry, intolerance, and folly of the men who voted for their passage.

The ostensible object of these bills is to regulate the practice of Christian Science, ... and the claim sometimes made that this class of legislation is only asked as protective measures for the people will no longer do. ... The talk of regulating the practice of Christian Science is as foolish and nonsensical as it would be to talk of regulating the "practice" of Catholicism, Methodism, Baptism, or Presbyterianism. And the State has no more right to attempt to "regulate" the practice of any of the latter isms than it has to "regulate" Christian Science. It is a religion as much as any of the latter. In this country a man has the right to worship God as he pleases. The Christian Scientist is certainly religious. His belief is a religion, and the fact that it inculcates healing without medicine, as taught by Jesus Christ, should not debar him from the protection of law, nor make him an object of tyrannical legislation. Such measures as are embodied in the bills above mentioned are class legislation of the grossest kind. They are of no earthly benefit to any one but drug doctors, and we should think—for their own self-respect—that they would not countenance the passage of such bills a single instant. Let every tub stand on its own bottom. If materia medica is the only true healing art, it will win recognition through its own virtues, and not by attempting to smother out all contrary teaching. Intolerance never wins in the long run. If Christian Science is error, it will soon fall of its own falsehood. Truth is as mighty now as when the omnipotent Father gave it birth. Let the people try both, if they will. In the crucible of time the real gold will be separated from the baser parts and the true virtues of each will shine out resplendent, and all may see, choose, and appropriate.

Send a comment to the editors
NEXT IN THIS ISSUE
Article
Mr. Editor:—You comment editorially upon an article... 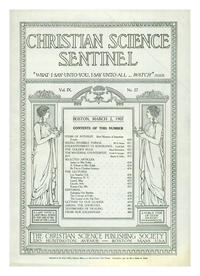