with contributions from O. F. Safford

Clear-eyed men of vision in all the churches note the fact that the secular press of the country does not rally to the support of ecclesiastics who are defending the ancient creeds and the standards of orthodoxy against those who, in their own churches, are breaking away from them. The heartiness with which the majority of the contributors to the daily press disregard the standards and demand that truth, without regard to ancient interpretations of it, shall be made the test of soundness in belief, and that liberty of thought and speech shall be granted to all, on the same terms that civil liberty is granted, is a new and surprising phenomenon. It is useless to account for it by the plea that these men are irreligious and therefore not to be heeded. If they are irreligious, they have a passionate interest in the fortunes of the truth, and their estrangement from the Church may have causes which lie not in themselves, but in the attitude of the Church itself.—Christian Register.

Had the Church maintained the view that health was the heritage of the children of the Lord, Christendom, as far as we can see, would have been saved from the distress caused by the supposed antagonism between the laws of nature and the laws of grace. The source of the Church's error and lack has always been unbelief; and having, through unbelief, mislaid the gift of health, she next pointed to her own experience to prove that God had withdrawn it; but "kings give; they do not lend;" and the gift, once given, must be hers. 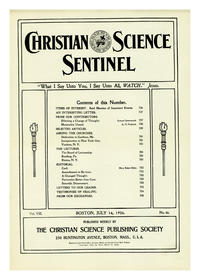