Healing through our Text-book

It is interesting to note that in the great number of testimonials of healing through Christian Science which come to us for publication, there are many in which this healing has been the direct result of reading the Christian Science text-book, "Science and Health with Key to the Scriptures" by Mrs. Eddy, and in this issue of the Sentinel a number of such cases are reported. It is the history of this book, that ever since its publication the sick have been healed by it; and this healing is one of the most tangible proofs that Christian Science is the truth. The healing of the sick through the persual of this book is also a tribute to the simplicity and logic of its teachings and the lucidity of its literary style.

The appeal of Science and Health is not alone to the intellectual and the cultured, but also to the simple and unlettered; and its healing ministry has manifested itself in the destruction of all manner of disease, — the so-called incurable as well as the seemingly trivial. Mrs. Eddy's place as a benefactor of the race does not, however, rest solely upon the fact that thousands of persons have been healed of bodily sickness by this book. The testimony is overwhelming that through it men and women have been redeemed from the enslavement of sin, and that they have been turned from agnosticism and infidelity to the understanding and worship of God and His Christ. Through the study of this book interest in the Bible has been revived, and not a few copies of the "Book of books" have thus been rescued from the obscure shelves and corners to which they had been consigned. 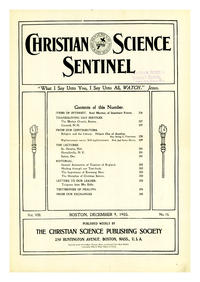