Our Literature in Foreign Countries

THE captian of the three-masted schooner, Carrie A. Norton, reported to the owners the following distribution of Christian Science literature:—

In the town of Horta, on the island of Fayal, one of the Azores, Science and Health was presented to the public library. It was received gladly and expressions of gratitude and thanks were returned to the vessel in whose name it was presented. 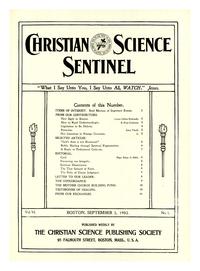