Among English speaking people, the widespread lack of care as to the exact meaning of words in common use has given rise to many of the difficulties which beset the pathway of the investigator in Christian Science. In the ordinary experiences of conversation many misunderstandings arise from the differing concepts which two or more people may have regarding the meaning of a word or a sentence, and the failure to recognize this is often the occasion of one man's putting the color of his interpretation upon another man's meaning. An honest explanation, giving further statement as to the original thought intended, will frequently furnish a common basis upon which to stand, and thus remove the confusion.

One cannot become a student of the Christian Science text-book, however, without being impressed with the author's significant use of English in giving to the world "the things of spirit." Experience has shown that those who fail to understand the statements made by Mrs. Eddy in her book, "Science and Health with Key to the Scriptures," do so largely because they do not unite with her in a common understanding as to the root meaning of many of the words used. The man who turns to his lexicon when tempted to quarrel with the statements of Science and Health, will usually find himself enlightened as to the correct use of the word in question, and will gain an increasing appreciation of the author's comprehensive and significant use of the terms employed. 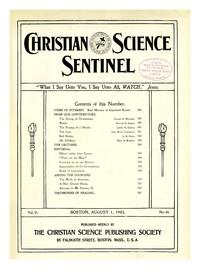