It will not do to assume that Christian Scientists do a great deal of good to themselves and to others "without knowing how they do it." It is the very knowing which entitles them to the name of Scientists, for Science is knowledge. First of all, they know that it is not they who heal the sick, but that the spiritual understanding of God performs this beneficent task. Not "emotion," nor the resulting "vibration," nor mere "cheerfulness" are sufficient to heal the patient who is lying unconscious, beyond all physical help. But Christian Science, the Science or knowledge of God's omnipotence over evil of every sort, does restore such a one to health and usefulness. It is not a question of the mere prevention of disease, although that is one of the greatest services which Christian Science is performing in our day and generation, but the question is one of the cure of so-called hopeless cases, of confirmed invalids, of acute and organic diseases.

If mere "cheerfulness" could cure diseases, there would still be left the possibility of cheerfulness to be explained under circumstances which make for despair and desolation. The cheerfulness of Christian Scientists is based upon the understanding that God is Love, and that to rely on Him is to enter into paths of peace and comfort, physically as well as mentally and morally. W. D. McCrackan.In New York Journal.

Send a comment to the editors
NEXT IN THIS ISSUE
Article
We are taught and we believe as Christian Scientists... 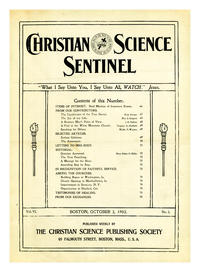