with contributions from B. A., W. Lambert

Owing to pressure on our space we are unable to publish several interesting letters on this subject, but wish to call attention to B.A.'s challenge.

Sir:—Christianity I know, and I understand the rudiments of science, but I confess that I am staggered by the union of two words which are so diametrically opposed in their meaning. The term Christian Science is contradictory in itself and an insult to one's understanding. I take it that the new religion is nothing but the old Faith-healing which has always had ready disciples among the lower classes, who love the miraculous and live on sensations. But what has this to do with science? What is there in this American-made Christianity to appeal to the cultured or, indeed, to any ordinarily educated man? Who are the followers of Christian Science? A handful of unknown men who have failed to make their way in life, and women of weak intellect and weaker nerves. I have never attended a meeting in the Upper Berkeley Street rooms, but feel confident that if I went I should recognize no well-known woman, and certainly no single public man. Yours truly,B. A. 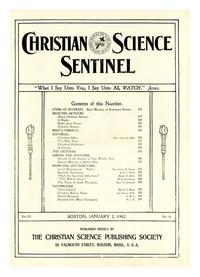