Carol Norton, C.S.D., of New York, lectured to a large and intelligent audience in the Academy of Music at Pottsville, Pa., Tuesday evening, November 14. He was introduced by Judge David C. Henning, who spoke as follows: —

Ladies and Gentlemen: — Probably there is no subject that has engaged the human mind in all this world, in every age, so much as has the subject of religion. I believe I say advisedly, in the light of the history of mankind, that there has never been found an original people who did not have a religion, and who did not possess at least some glimmering ray of immortality. 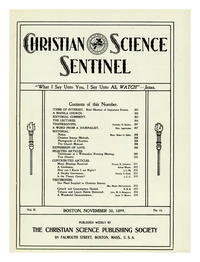