Christian Science was introduced to me by a new student of...

Christian Science was introduced to me by a new student of this religion seven years ago when I was an undergraduate in college. He had been an active member of the Protestant church I had always attended. He was not satisfied with the answers or lack of answers to his questioning about God and man he had received from the ministers and Sunday School teachers he had had. So he bought a copy of the Christian Science textbook, Science and Health by Mrs. Eddy, and started studying it along with his Bible. I was doubtful about Christian Science because it sounded too good to be true. I wanted to be sure that it was in accord with the Bible, especially the teachings of Christ Jesus.

I began to attend Christian Science lectures and also to read the textbook. I found myself depending on prayer for healing, and being healed by God.

Send a comment to the editors
NEXT IN THIS ISSUE
Testimony of Healing
I have been a Christian Scientist for many years and have had... 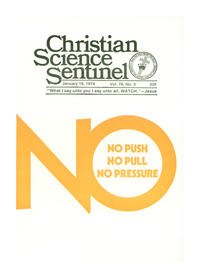