Impelled by widespread threats of war in Southeast Asia, Australia is building up its Armed Forces and has reintroduced conscription for service in the Army. Consequently, the numbers of Christian Scientists in uniform are growing.

The Australian branch of Christian Science Activities for the Armed Services, which has been operating for nearly twelve years, is alertly preparing for this buildup. At present it has ten Christian Science Ministers for the Armed Services and one Christian Science Representative in the Aimed Services. One of the ten Ministers also serves as the supervisor of the branch. The Ministers and Representative visit Navy, Army, and Air Force installations that are within reasonable distances of the capital cities of Australia. The supervisor calls at the more distant training centers if emergencies arise. All service hospitals are visited by Ministers.

Send a comment to the editors
NEXT IN THIS ISSUE
Testimony of Healing
In humility and ever-increasing... 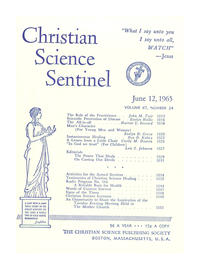