These include showings of films selected from time to time from the television series, "How Christian Science Heals," and of The Christian Science Monitor film, "Assignment: Mankind." Also included are the "listening chairs" in which visitors may sit and hear selected recordings not only in English, but in French, German, and Spanish.

Send a comment to the editors
NEXT IN THIS ISSUE
HOW CHRISTIAN SCIENCE HEALS
RADIO PROGRAM No. 348 - The Spiritual Awakening That Brings Healing 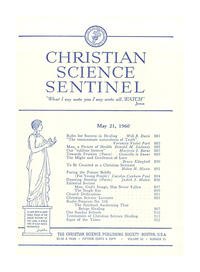