"THE WHITE WINGS OF THE HOLY GHOST"

The Gospels record that during Christ Jesus' three years' ministry on earth there were many instances of his casting out devils, evil spirits, unclean spirits, dumb or talking spirits. And when he commanded these evil beliefs to leave poor deluded mortals, they obeyed him. Their occasional resistance to his divine word of authority was always overcome.

Over nineteen hundred years have elapsed since those days, and in the intervening time many theories have been put forward as to what the precise nature of those evil spirits might have been. Jesus himself gave the right answer when he denounced the devil as a liar, having no truth in him and therefore completely unable either to create or to destroy any reality. 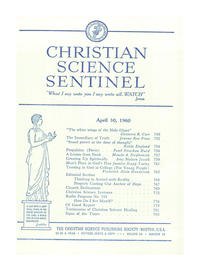