The resurrection of Christ Jesus was an event of such tremendous importance that the Christian world has continued to honor it in ever-increasing measure. Jesus himself declared, "I am the resurrection, and the life" (John 11: 25). Nevertheless, until the Comforter which Jesus promised had appeared as Divine Science, the world remained in comparative darkness as to the grandeur of the Master's demonstration over death and its far-reaching effects.

The events of the first Easter are related in the Gospels. In the sixteenth chapter of Mark we read that as soon as the Sabbath was past, after the crucifixion of Jesus, three sorrowing women brought sweet spices with which to anoint the body of their beloved Master. When they reached the sepulcher very soon after sunrise, they found to their great astonishment that the stone before the door had been rolled away. Upon entering the sepulcher "they saw a young man sitting on the right side, clothed in a long white garment." He said to them, "Ye seek Jesus of Nazareth, which was crucified: he is risen; he is not here: behold the place where they laid him." 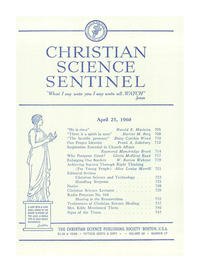