NO HINGE FOR ERROR

God reveals Himself through spiritual creation. To this the first chapter of Genesis attests. In this chapter each stage of unfoldment is described, giving the reader a whole and unified concept of that which has no beginning and no end.

Present-day students of the Bible, as interpreted by Mary Baker Eddy in "Science and Health with Key to the Scriptures," readily accept the conclusion of scholars that the account of creation in the second chapter of Genesis is written from an entirely different standpoint. In this chapter creation is described as material. Were this true, there would be two issuances, namely a spiritual universe and a material world, from the same source. 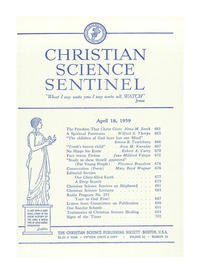