"KEEP YOUR EYE ON THE BALL"

Almost everyone who has played the game of golf has at some time received this instruction: "Keep your eye on the ball." It is important for one to do this. If he does not, he probably will find his head lifting as his club is about to strike the ball, and he will be looking ahead to see where the ball is going before he hits it. If he does this, he very likely will have a poor shot because he has taken his eye off the ball. But, if instead, he keeps his head down, his eyes where they belong, and follows through with his shot, he is almost certain to see a good result.

Nevertheless, even though he is aware of the importance of doing as he has been instructed, the average golfer seems to find it difficult to be obedient. He may say to himself, "I'm going to do it this time." And the next thing he knows, he sees a poorly executed shot, and immediately he is aware of the mistake he has made. 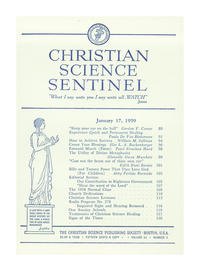