The example of a co-worker at...

The example of a co-worker at the office where I was employed thirty-five years ago implanted in me a firm desire to be a Christian Scientist. However, earnest study was not taken up until several years later, when my husband's protracted illness awakened us to the need of a religion which would sustain us in time of stress. Since taking up the study of Christian Science, we have been confronted with many problems, but this wonderful religion has given us an understanding of Truth with which to meet them, and it has given us the satisfying way of life besides.

I recall our first testing time after deciding to rely upon Christian Science. Our son, then very young, met with an accident on the playground and was brought home from school with a gash in the back of his head. I called a Christian Science practitioner for help, and by the time the wound was bathed and the child quieted, I called back to report that the wound had closed. As a result of this instantaneous healing the child was back in school the next morning.

Send a comment to the editors
NEXT IN THIS ISSUE
Testimony of Healing
With deep gratitude and reverence... 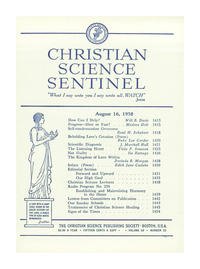