For some time I attended a...

For some time I attended a Church of Christ, Scientist, with my aunt, who was like a mother to me. While we believed its teachings and recognized that Christian Science was the religion Jesus taught and practiced, our knowledge of how to apply it was extremely limited.

Later I experienced a severe physical breakdown, and while in a coma I was taken to a hospital. The doctors said that if I was to recover it would be necessary for me to undergo a brain operation. The operation was begun, but the doctors were forced to discontinue because of my condition. After I had lain in a coma for three days, the doctors said they could do no more for me. 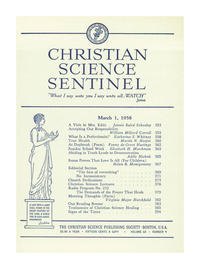