People who have read about the reduction in the size of the Armed Forces of the United States, Great Britain, Australia, and other countries frequently ask if Christian Science Activities for the Armed Services is as busy as it was two or three years ago. The answer is that there has been only a slight decrease in the work. Armed Services Activities still has a total of four hundred and eighty-four field workers, the same number of workers it had three years ago.

These faithful men and women continue to carry on the work of helping to meet the physical, mental, moral, and spiritual needs of Christian Scientists in the Armed Forces in thirty-four countries around the world. 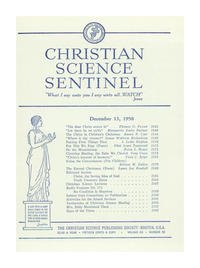