The prophet Zechariah tells of being awakened and of seeing a great vision—a candlestick of gold, having on either side of it two olive trees. Reverently he ponders the meaning of the vision: the olive trees and the golden oil which poured into the great golden bowl on top of the candlestick.

The prophet asked the angel that had awakened him what the vision meant, and the angel replied (Zech. 4:6), "This is the word of the Lord unto Zerubbabel, saying, Not by might, nor by power, but by my spirit, saith the Lord of hosts." And, in explanation of the two olive trees, the angel later said, "These are the two anointed ones, that stand by the Lord of the whole earth." 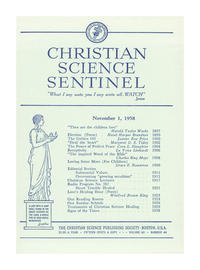