[Following is the text of the program of the above title released for broadcast the week end of September 20-22 in the radio series, "How Christian Science Heals," heard internationally over more than 800 stations. This is one of the weekly programs produced by the Christian Science Committee on Publication, 107 Falmouth Street, Boston 15, Massachusetts.]

Speaker: I'd like you to know Mrs. Frances Marshall of Fort Worth, Texas.

Mrs. Marshall: When I was about twelve years old, I began to put on a good deal of weight, and by the time I was seventeen I was very large and unattractive. I was shy and very unhappy and felt quite inferior to others. In fact, I just hated myself because I was so heavy. 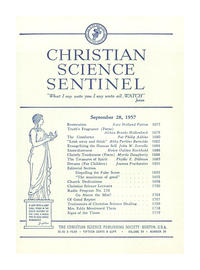