Christ Jesus was the greatest doer and provider that the world has seen, and he taught that anyone who obeys his teachings can follow his example. His teachings were quite different from the religious instructions of his time. He repudiated material evidence in his healing work. Personal glory and goodness he also denied. He said that his kingdom was not of this world. He taught of the unseen God and of God's kingdom, invisible to material sense, and of the laws of this spiritual kingdom.

After assuring his followers of the practical benefits which God bestows upon mankind, Jesus said (Matt. 6:33), "Seek ye first the kingdom of God, and his righteousness; and all these things shall be added unto you." Lest we be in doubt as to the whereabouts of this kingdom, let us turn to Jesus' statement recorded in Luke (17:21), "The kingdom of God is within you." This does not point to a far-off goal to be reached after death, but to a mental state here and now. 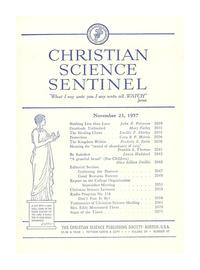