It has been said that "man's extremity is God's opportunity." My family had proof that this is so.

Shortly after a neighbor had interested us in Christian Science my father, my mother, and I moved to another state. It was during World War I, at the time of the influenza epidemic, and my mother was stricken with the disease. As we were new in Science and were living temporarily with my father's parents, who were not Christian Scientists, a doctor was called. My mother grew steadily worse, and after she had been in a coma for several days the doctor said that she was dying and that there was nothing more he could do.

Send a comment to the editors
NEXT IN THIS ISSUE
Testimony of Healing
It is indeed cause for gratitude to... 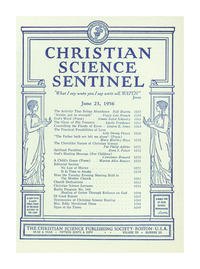