THE CAT'S TAIL AND THE MARTINS

In Christian Science, sickness and sin may both be dealt with as temptation. The temptation which comes to us as reality and power and our response to that temptation are what we know to be animal magnetism.

The following may serve as an illustration. In the grounds behind a family's house there was a large birdhouse occupied by a flock of martins. This birdhouse was situated high on a pole and was so constructed as to be secure against attack by a cat or other marauder. The family also had a pet cat that liked to go back into the higher grass and there catch martins. He would lie down in the tall grass and slowly wave his tail back and forth. The birds became disturbed, and through curiosity or anger would fly down at the waving tail of the cat, whereupon the cat with ready paw would catch an unwary bird right out of the air. 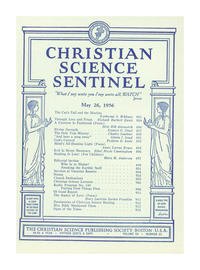