Out of the depths have I cried...

"Out of the depths have I cried unto thee, O Lord" (Ps. 130: 1). Like the Psalmist, I too cried to God out of the depths, and He healed me, comforted me, and blessed me. I thank God for the healing, sustaining power of Christian Science, which was revealed to our dear Leader, Mary Baker Eddy. Through her discovery the religion of Christ Jesus has been brought to the world again. I am so grateful that I accepted it and that I am proving it to a degree.

Christian Science was first brought to my attention through a healing my father had of sick headaches. I attended the Sunday School for two or three years. The seed of Truth was sown, but it appeared not to take very deep root. Some years later, when I suffered a serious illness diagnosed as peritonitis, and several doctors advised an operation, I again turned to Science. After receiving treatment for a considerable period of time, I was completely healed. 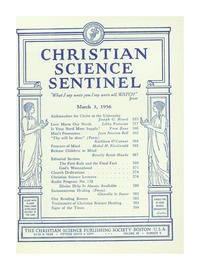