I should like to tell very gratefully of some of the many healings I have received from the study of Christian Science. Before coming to Australia from England some years ago, I had two attacks of rheumatic fever which kept me in bed for months at a time and which resulted in heart trouble. After living in Australia for two years I became so ill with the heart condition that I was put into hospital. A week later I was sent home, having been told that nothing more could be done for me and that I must expect to be a semi-invalid for the rest of my life.

It was then that Christian Science was presented to me, and it brought the turning point in my life. I began attending a Church of Christ, Scientist, although at times I could hardly stand up to sing the hymns. A little later I started to read the textbook, "Science and Health with Key to the Scriptures" by Mary Baker Eddy. Gradually the fear and confusion which had so filled my thought began to disappear, and I became well, strong, and active. The healing has been permanent, and since then not a day has been spent in bed.

Send a comment to the editors
NEXT IN THIS ISSUE
Testimony of Healing
During the Second World War,... 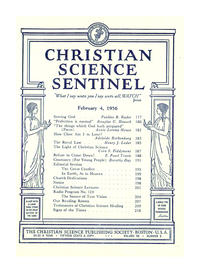