History records that there have always been those who doubted the revelation of Truth when it came, despite the works which always accompanied it. The children of Israel doubted Moses and demanded signs. But even after the signs were given—and they were potent signs—the Israelites still doubted and made themselves a golden calf to worship.

It is true that under the inspired leadership of Moses, resulting from his obedience to God's commands, the children of Israel were released from their grievous bondage to Egypt. However, their refusal to continue to serve only one God resulted, by the time that Jesus appeared, in their being in bondage again—this time to the Romans. Their bondage, indeed, was so severe that once again they were longing for and eagerly expecting a Messiah, who would lead them out of this bondage. 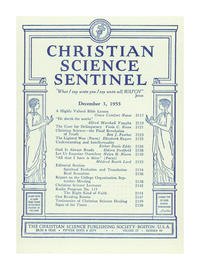