[Following is the text of the program of the above title released for broadcast the week end of January 21—23 in the radio series, "How Christian Science Heals," heard internationally over about 600 stations. This is one of the weekly programs produced by the Christian Science Committee on Publication, 107 Falmouth Street, Boston 15, Massachusetts.]

RADIO PROGRAM No. 71 - "How I learned to overcome lack"

On this program Miss Sofie Aslesen of Oslo, Norway, told of her own experience, as follows: 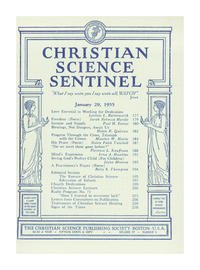