[Following is the text of the program of the above title released for broadcast the week end of January 7-9 in the radio series, "How Christian Science Heals," heard internationally over about 600 stations. This is one of the weekly programs produced by the Christian Science Committee on Publication, 107 Falmouth Street, Boston 15, Massachusetts.]

RADIO PROGRAM No. 69 - A Proof That Prayer Heals

On this program Mrs. Alice B. Hyatt of Louisville, Kentucky, told of her own experience, as follows:

Let's see—it was almost ten years ago that I was healed of cancer. For some time I had had a lump in my left side, and finally I had an exploratory operation. Tests were sent to a laboratory, and the doctors decided it was an active case of cancer. In ten days another operation was performed, which left me without the use of my left arm. Later I discovered these same symptoms in my right side. I knew I had a decision to make and wanted to think it out for myself. 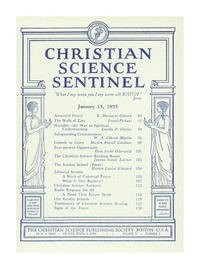