A Striking refutation of the almost universal belief that man is born to devote his life and labor to material pursuits appears in "Science and Health with Key to the Scriptures" by Mary Baker Eddy. Here she states (pp. 517, 518): "Man is not made to till the soil. His birthright is dominion, not subjection." In thus affirming man's eternal and inviolable superiority to the fettering claims of a supposed material existence, the Discoverer and Founder of Christian Science was clearly directing mankind's attentions toward a higher sense of activity and accomplishment than is possible through mere human endeavor. 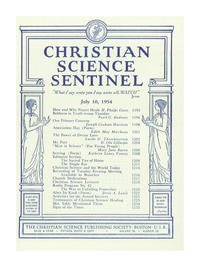