[Following is the text of the program of the above title released for broadcast the week end of June 4-6 in the radio series, "How Christian Science Heals," heard internationally over about 600 stations. This is one of the weekly programs produced by the Christian Science Committee on Publication, 107 Falmouth Street, Boston 15, Massachusetts.]

RADIO PROGRAM No. 38 - Healing the Aftereffects of War

On this program Fred J. Lewis of St. John's, Newfoundland, told of his own experience, as follows:

In the First World War, I received a gunshot wound in the upper arm between the elbow and the shoulder, the bullet passing through the bone and shattering it badly. For more than twenty-seven years I had so many operations that I lost count of them. Finally my sister persuaded me to read "Science and Health with Key to the Scriptures" by Mary Baker Eddy. I had not been reading it very long when my arm became inflamed again. I understood very little of what this book teaches about God's power to heal—but enough so that I decided to turn to Christian Science for healing. 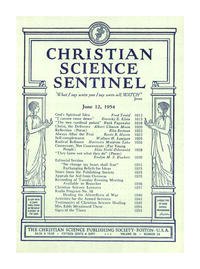