When Jesus, accused of being a malefactor, stood before Pilate, this Roman governor, in conformity with an ancient custom that permitted at the feast of the Passover the release of one who was accused of a crime, asked the Jews whether they would have Jesus released. The Jews replied by crying (John 18:40), "Not this man, but Barabbas." Yet we are told that "Barabbas was a robber."

The Jews, like Barabbas, believed in the reality of evil. Hence their opposition to Jesus was in reality their opposition to the Christ he manifested. The consciousness of divinity was disturbing to their evil senses. The Christ, which Mary Baker Eddy defines in "Science and Health with Key to the Scriptures" (p. 583) as "the divine manifestation of God, which comes to the flesh to destroy incarnate error," speaks constantly to human consciousness, bringing to it that which heals the sick and sinful, besides enriching, beautifying, and ennobling thought. 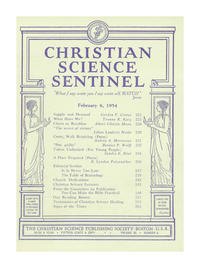