A BROADER CONCEPT OF BUSINESS

One of the leading industrialists has written a book appraising the manners and morals of businessmen, urging that they broaden their appreciation of moral, ethical, and spiritual values, thereby fulfilling a greater service to themselves, to their businesses, and to their communities.

To those who feel that they have a share in the development of their companies or consider that they have a responsibility to their employees and stockholders, the study of Christian Science can become a most important factor. On page 128 of "Science and Health with Key to the Scriptures" Mary Baker Eddy says: "The term Science, properly understood, refers only to the laws of God and to His government of the universe, inclusive of man. From this it follows that business men and cultured scholars have found that Christian Science enhances their endurance and mental powers, enlarges their perception of character, gives them acuteness and comprehensiveness and an ability to exceed their ordinary capacity." 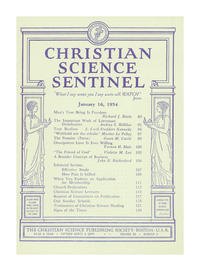