History is filled with records of persons who suffered for their religious convictions; and these were called martyrs. The early Christians believed it a virtue to die for their cause. While Christian Science honors the spirit of self-sacrifice and faithfulness which the early martyrs exemplified, it insists that persecution is a problem to be solved, a lie to be disproved, since God, Truth, is All-in-all and justice is a universal divine fact. The triumph of Truth alone is legitimate. Our Leader, Mary Baker Eddy, discusses martyrdom from the standpoint of Christian Science in "Miscellaneous Writings," where she says (p. 121): "Anciently, the blood of martyrs was believed to be the seed of the Church. Stalled theocracy would make this fatal doctrine just and sovereign, even a divine decree, a law of Love!" And she concludes, "That the innocent shall suffer for the guilty, is inhuman."

The Scriptures teach the power of innocence. In them the highest symbol of might is the lamb, that harmless creature which has no means of self-protection. The lesson of this figure is that purity and innocence, not worldly means, have dominion over all evil and persecution. To die for Christ, Truth, according to Christian Science, is to practice self-immolation, to put off the false sense of self for the real man, made in God's likeness. And this is the most joyous, the most exalting, of all human experiences, for it lifts human consciousness into the actual consciousness of Spirit, where man is as immutable and secure in righteousness as is his Maker. Self-immolation demonstrates man's ability to express God's will invariably. 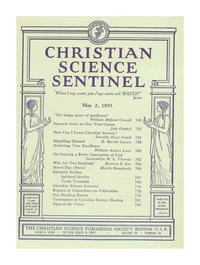