As a young child I loved the...

As a young child I loved the Bible lessons and especially the stories of Jesus and his healing works. I knew that it was God who healed, but until I began the study of Christian Science, I believed that God performed these healings through our prayers, but with the help of doctors. I took up nursing because I believed that that was the nearest I could come to following in the Master's footsteps.

Friends who had just begun the study of Christian Science tried to interest me in this Science, but I felt I was following the Master's teachings to the best of my ability. Six months later our physician, who had done all he could for her, placed our ten-month-old daughter, who was very ill, in the hands of the Almighty. When our prayers seemed of no avail I telephoned these friends and asked them to pray the way they were being taught through their study of Christian Science. My call was at about two o'clock in the afternoon, and three hours later, when the doctor arrived expecting to pronounce the child dead, she was toddling around in her crib perfectly well and happy. He said, "Nothing could have saved her but God." 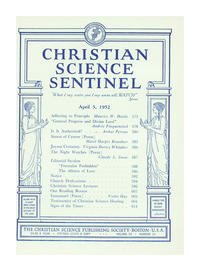