"NEITHER DO I CONDEMN THEE"

When Christ Jesus said to the woman under the condemnation of the scribes and Pharisees, "Neither do I condemn thee: go, and sin no more" (John 8:11), he was teaching a lesson which the student of Christian Science can apply in his healing work. Consider what must have happened that day in the temple. In the face of the Master's requirement, "He that is without sin among you, let him first cast a stone at her," not one of the woman's accusers could follow through with the punishment. Their own guilty consciences gave them no standard from which they could judge another correctly. But Jesus, at whom no finger of condemnation could point because his purity was so evident, had an absolutely reliable standard. It was the perfection of God's creation.

Christ Jesus did not see as real a sinning woman, because he refused to accept the evidence of false material sense. He knew that the real woman, the woman whom God created, was perceptible only to spiritual sense. The child of God, he understood, expressed perfection and holiness. As God's image and likeness, she could express nothing less. "Neither do I condemn thee." Using a dictionary definition of the word condemn, we may interpret this, "Neither do I declare God's child to be guilty." 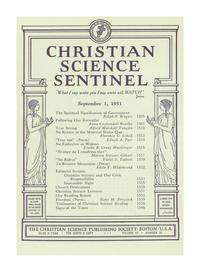