No Christian Scientist ever entertains the notion that evil is any part of his equipment for accomplishing good. Never does an adherent of this religion attribute the slightest value to such pronouncements of mortal mind as: "This person deserves suffering. It will do him good." On the contrary, the Christian Scientist thinks always in terms of reducing and wiping out the suffering of mankind generally and of every person specifically who, under right circumstances, makes known his genuine desire for the Christian Scientist's help.

The great Discoverer of Christian Science, Mary Baker Eddy, has stated her object clearly in this regard, and her followers understand that she expected them to make her object theirs. In her textbook, "Science and Health with Key to the Scriptures," she has written of herself, as the Discoverer and Founder of Christian Science (p. 457), "Her prime object, since entering this field of labor, has been to prevent suffering, not to produce it." 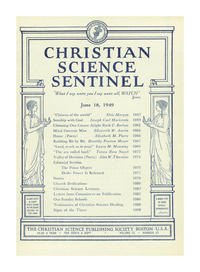