Christian Science has been my only physician for thirty-six years, and I have had many proofs of God's care. Before knowing anything about Science, I once took by mistake some medicine which was poisonous. I called to my next-door neighbor, who was a Christian Science practitioner. I thought I was passing on and wanted her to pray for me. When I regained consciousness, she said, "God is All-in-all." Instead of passing on, I began to live, for I learned the truth, and the truth made me free.

Later I had an accident to my foot, which drained for a year. Then I had two Christian Science treatments and was healed. I began to study earnestly and have since had healings of headaches, a severe heart ailment, hemorrhoids, a torn ligament in my limb, fear, and grief. All these and many other difficulties have been overcome through the sincere study of the Bible and all of Mrs. Eddy's writings.

Send a comment to the editors
NEXT IN THIS ISSUE
Testimony of Healing
Christian Science was brought to... 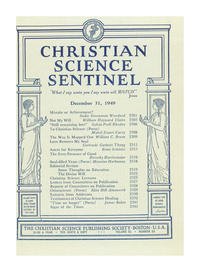