I was brought up in Christian Science...

I was brought up in Christian Science and attended two schools for daughters of Christian Scientists in England. I entered the business world, but at the entrance of Canada into the World War there was no position to be had in the advertising field, my chosen profession. So I trained as a medical technologist and during this time drifted completely away from the teachings of Christian Science. I would remark to my mother, "How can I say there is no such thing as tuberculosis when I can see it under the microscope?" To me at that time it seemed very real, for I was blinded by the mists of materiality. A few years later I was to see a dear one healed of tuberculosis through Christian Science treatment, when she was considered a very serious case by the medical profession.

Over four years ago my only sister was taken seriously ill with phlebitis, and three doctors despaired of saving her life. She turned to Christian Science and within three days was out of danger. This healing opened my eyes to the reality of Truth and the unreality of the material world as I was seeing it around me, through the eyes of the medical profession. I immediately handed in my resignation at the laboratory. 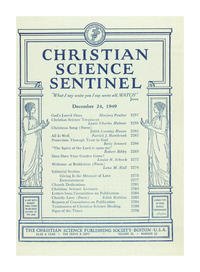