[The Publishers' Agent has arranged for advertisements of the Christian Science textbook, "Science and Health with Key to the Scriptures" by Mary Baker Eddy in a selected number of cities. The advertisements are paid for jointly by the Trustees under the Will of Mary baker Eddy and by branches of The Mother Church in the vicinity.] Missouri

The advertising of "Science and Health with Key to the Scriptures." which was arranged by the publishers' Agent at Boston, was continued again this year for another forty-week program in thirty of our largest cities. The advertising is being carried by the St. Louis Post-Dispatch and the Kansas City Star. Half the expense is borne by the office of the Publishers' Agent and half by the branch churches in the areas served by the two newspapers. Branch churches in Kansas City, Kansas, and those in Illinois near St. Louis have very lovingly joined in aiding this program. Texas 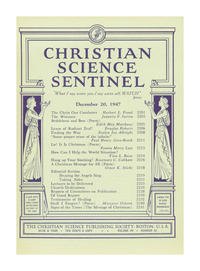