Make a Highway in the Desert

The bulldozer—a steel blade pushed by a tractor—is named in a recent article in the magazine Fortune as the inanimate hero of the present war. The reason is that it is the machine which moves dirt, uproots obstructions, blazes trails, builds roads, and does many other useful things faster and often better than men have been able to do them before. "The pace of this war," says the article, "has hung upon the speed with which the earth has been moved." A foreigner observing the rapidity with which our forces, using bulldozers and other equipment, built roads, commented, "You have no idea how the Yanks make roads; they lay the concrete down like toothpaste."

Trails, roads, and highways, in their successive development, have for centuries been indicative of the desire of men to facilitate travel and communication. The Indians used, and added to, the trails made by animals of the wild. White men. with their wagons, widened and improved these trails into roads, and now have come the hard-surfaced highways for motor travel. As human thought loses more of its limitations and discovers more of its capacities, safer, more rapid, and more comfortable transport will appear. 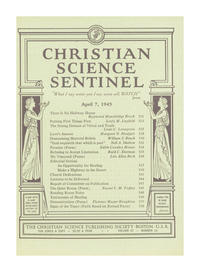