Rules from Another Standpoint

The point system inaugurated by the Army for the discharge of men has become a general topic of conversation. One soldier has found that to keep his thought clear and above the argument that these points govern his whereabouts, he has simply to understand that man's place or well-being does not depend upon any mortal mind system or any human being, regardless of rank.

Although the Army has set up this long-thought-out plan to bring about intelligent release of men into civilian life, we as Christian Scientists know that, as our Leader, Mary Baker Eddy, says on page 195 of "Science and Health with Key to the Scriptures," "The point for each one to decide is, whether it is mortal mind or immortal Mind that is causative." We know that it is God, divine Mind, Principle, that governs, guides, and directs man. As a spiritual idea, man is always in his rightful place in Mind. 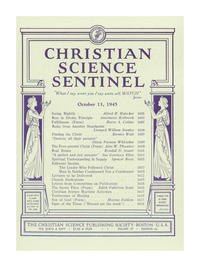