The Bread of Life

"I Am the bread of life," said Jesus to those Jews for whom he had so liberally provided a repast in the desert, seeking to turn their thought from the outward manifestation of loaves and fishes to the qualities of thought which had enabled him to give the needed nutriment through the exercise of divine power. His guests at the spiritual repast had then followed him across the sea of Tiberias, hoping no doubt for further material advantage. Then, as though to test and enlighten them, he added to the statement quoted above, "I am the living bread which came down from heaven: if any man eat of this bread, he shall live for ever: and the bread that I will give is my flesh, which I will give for the life of the world."

Everywhere that Spirit led him Jesus found those who received him gladly; everywhere he found also a famine of the hearing of the word of the Lord, though much outward observance of rites and ceremonies. With parable and miracle, Jesus persistently sought to enlighten this mental darkness. He fed humanity through the exercise of spiritual law, he healed by divine power, he provided for the tribute money through a knowledge of spiritual supply, thus pointing unerringly to the government of God. 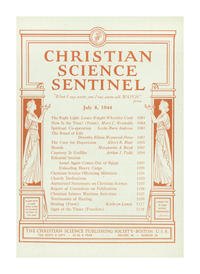